Like the OceanOne underwater robotK carefully sailed to the railing of the upper deck of the sunken Italian steamship The Francesco Crispi About 500m below the surface of the Mediterranean this month (about a third of a mile), Stanford University roboticist Osama Khatib felt like he was there himself.

The Stanford Robotics Lab team discusses its OceanOne underwater robotK, which has special features that bring human touch, vision and interactivity 1,000 meters below the surface. In this video they talk about OceanOneKFirst expedition of throughout the Mediterranean end of 2021 and beginning of 2022.

OceanOneK has a humanoid top half and a slimmer rear half with eight multi-directional thrusters that allow for careful maneuvering underwater. The robot’s haptic – or tactile – feedback system and stereoscopic vision produced incredibly realistic sensations that matched what it would have felt if it were below rather than above aboard the control vessel. Look through OceanOneK With his robot eyes and hands, Khatib perceived a kaleidoscope of life – pink and green and rusty orange – superimposed on and around the ship. He felt the resistance of the water and could discern the shapes and proximity of the historical relic around him.

“You move very close to this amazing structure and something incredible happens when you touch it: you feel that,” said Khatib, who is a Weichai Professor in the School of Engineering and director of the Stanford Robotics Lab. “I had never experienced anything like this in my life. I can say I’m the one who touched the crispi 500m away. And I did – I hit that, I felt this.”

OceanOne’s missionK at these depths had two goals: to explore places that no one has yet visited and to show that human contact, vision and interactivity can be brought to these sites far from places where people can operate.

While OceanOneK enjoyed many milestone adventures and achievements during two multi-stop voyages around the Mediterranean, the overarching accomplishment of the team – which included Michel L’Hour, the former Director of Underwater Archeology Research at French Ministry of Culture (DRASSM), Vincent Creuze from LIRMM at the University of Montpellier, Denis Degez and Franca Cibecchini from DRASSM, and the ship’s crew – demonstrated functional autonomy at nearly 1,000 m depth. It was this breakthrough that led to the change of name from OceanOne to OceanOne.K.

“It’s the first time a robot has been able to go to such depth, interact with the environment and allow the human operator to feel that environment,” Khatib said. “It’s been an incredible journey.”

Scenes from OceanOneKsecond expedition to the Mediterranean in the summer of 2022.

The February dive at crispi had been part of a multi-leg tour of the Mediterranean for OceanOneK which began in September 2021 with two stops near Marseille to a 40m (about 130ft) World War II P-38 Lightning aircraft and a submarineThe Proteus, at 124 m (about 400 ft). The third was to a 2nd century Roman ship in Aleria, Corsica at 334 m (almost 1100 ft) and the Crispsi was next.

The search for favorable weather then pushes the team towards Cannes. There, the robot’s boom camera was used for the first time in viewing inside the cockpit of a Beechcraft Baron F-GDPV aircraft which was 67m deep (over 200ft). The final dive was to 852m – over half a mile deep – where, stopping for a thruster check, the team found, worryingly, that the robot was unable to ascend. OceanOneK worked perfectly, but the floats around the communication and power line collapsed, leaving the long, heavy line stacked on top of the robot. By pulling on the slack, they were able to continue the dive.

As a commemorative marker, OceanOneK placed a plaque on the seabed that read:

OceanOneK with its boom camera in hand near a Beechcraft Baron F-GDPV aircraft at 67m depth (over 200ft). (Image credit: Frederic Osada/DRASSM/Stanford)

OceanOneK the robot’s expedition to kilometer 1 was prepared for a long time. It started with countless hours of designing, experimenting, and assembling with other team members in the lab, dozens of trips to the Stanford pool for debugging, and a myriad of lessons to learn. before facing the unpredictability of the real world.

OceanOne’s predecessorK, OceanOne had been built to reach depths, at most, around 200 m. To take the robot deeper, the researchers fitted its body with a special foam made of glass microspheres that provide buoyancy while being able to withstand the immense pressure at 1 km depth – more than 100 times greater pressure. to the sea-level experiment. Additionally, the robot arms were filled with an oil-and-spring mechanism that compresses oil to match external pressure, preventing collapse and dampening the electronics. Researchers also updated many tiny components in OceanOne to minimize the amount of compressible air residing in individual parts and to keep the robot as compact as possible.

OceanOneK featured additional enhancements that increased the versatility of his arm and head movements, and two new types of hands – one developed by Mark Cutkosky’s lab at Stanford and the other by Professor Antonio Bicchi of the University of Pisa and the Italian Institute of Technology, IIT.

Swimmers at Stanford’s Avery Recreational Pool in recent years may have seen OceanOneK take a bath while the researchers tried out different maneuvers and experimented with tools. The tools included boxes for carrying objects and the boom-mounted video camera that allowed them to see inside tight, inaccessible spaces – spaces where the robot could not go.

“Physically distancing humans from dangerous and inaccessible spaces while connecting their skills, intuition and experience to the task promises to fundamentally change remote working.”

“It was several months of testing, during COVID, twice a week,” said Adrian Piedra, also a Stanford Robotics Lab graduate student, as they ran through the issues until everything — touch, control, vision — works without a hitch.

Such preparation paid off in many ways, but especially when the team had to fix OceanOneKdisabled arm during their first expedition. “It required opening the robot up in pieces on the deck of the boat, at night, downwind and during a storm,” Khatib said. “Our heroic students – Adrian Piedra and Wesley Guo – worked non-stop to fix the robot.” According to Khatib, their perseverance, determination and eventual success amazed everyone on board.

“The robot has so many features and so many interrelated components that if there’s a broken part, we might need a full day to disassemble, repair and reassemble,” said Stanford Robotics graduate student Bo Kim. Lab, who traveled with OceanOne and collaborated from campus for OceanOneK. “Everything has to merge and work simultaneously for the expedition to be successful, and that’s really a challenge.”

This summer, the team had a second chance to dive on the Roman ship and the crispi, following some difficulties during their first visits. When they first interacted with the Roman ship, the team had tried – but failed – to retrieve an oil lamp from the ship. At crispi in February, a defect in the arm prevented the use of the pole camera. For the July dives, everything was gone.

OceanOneK dove again on the Roman ship, this time under the guidance of the team’s archaeologists and managed to bring up a handful of valuable ancient vases dating back to the Roman Empire, some of which had never before been seen in collections of the DRASSM. These were exceptional finds in that they still bore the name and label of their maker, illustrating the benefits of careful recovery of ultra-deep artifacts.

On a second dive to the crispi, Khatib extended the boom camera into the fractured hull of the ship, being careful not to touch the breaking edges. The team’s marine biologist guided him and watched eagerly as the outer corals gave way to the inner rusticles – icicle-like formations of rust – which showed the effects of around eighty years of interaction. bacterial with iron from the vessel.

Look back and forward 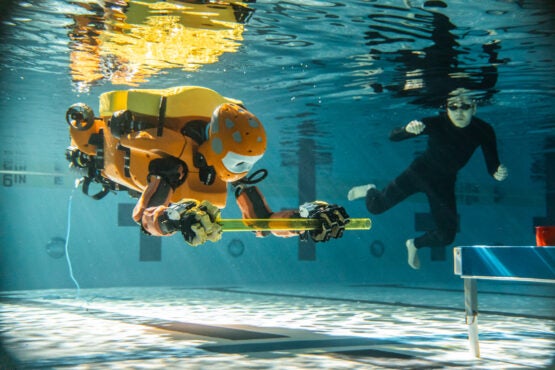 “We go all the way to France for the expedition and there, surrounded by a much larger team, coming from very diverse backgrounds, you realize that the piece of this robot that you worked on at Stanford is actually part of something much bigger,” he said. “You get a sense of how important that is, how new and important diving is, and what that means for science in general.”

The OceanOne project not only embodies advanced innovations in the fields of haptics, underwater robotics and human-robot interaction, but also new opportunities for marine science and underwater engineering activities. , such as inspecting and repairing ships and infrastructure, including bridge piers and submerged pipelines.

Further expeditions are planned to various locations around the world, including lost cities buried in deep lakes, coral reefs and archaeologically significant shipwrecks at depths so far beyond human reach that OceanOneK offers a unique opportunity to understand the past.

“Physically distancing humans from unsafe and inaccessible spaces while connecting their skills, intuition and experience to the task promises to fundamentally change remote working,” Khatib said. “The robotic avatars will search for and acquire materials, build infrastructure, and perform disaster prevention and recovery operations, whether deep in oceans and mines, on mountaintops, or in space.”